What Chick Corea Meant to Me

On February 11, 2021, it was announced to the world via social media that we had lost famed musician Armando Anthony "Chick" Corea to a rare form of cancer at 79 years of age. To many (including myself), this came as a complete shock -- Chick had been one of the most active musicians during the pandemic. As recently as 5 weeks ago, he was posting new material to his Instagram, answering fan questions, playing music, and being the person everyone recognized him as: an incredibly talented musician with a natural ability (and desire) to teach the world what he knew.

Now that The Maestro is gone, I thought I would write a little bit about what he taught me, and what he meant (and still means) to me.

My first exposure to Chick Corea was fairly indirect. In my sixth grade rock band class, my teacher showed us an old instructional VHS tape of bassists Victor Wooten and Steve Bailey. I didn't play bass at the time, but I was blown away by the first song they played on the tape: "A Chick From Corea"

Other than knowing the song title and hearing Victor mention the song was "inspired by [...] Chick Corea", I didn't pay much attention to the song's namesake. It wasn't for a year or so until I found some music by the man himself that blew me away more than "A Chick From Corea" ever had.

Around this time I was becoming a much more serious music fan, and, as is so typical of teenagers getting really into music1, I started developing a growing vinyl collection -- complete with an old Pioneer PL-7 and Turtles record crates. My friends and I used to go to this one record store a lot, and eventually we started helping out the owners, who were happy to see someone under the age of 50 in their store. My one friend had told me about this record called "Romantic Warrior" by a band called "Return to Forever".

"It's called 'jazz fusion', but it's basically prog", he told me. With my interest piqued, I asked the guy who collected records to sell if he had seen any copies of the LP recently. He told me that he hadn't, but if he saw one he would hold it for me. A couple weeks later, as fate would have it, someone had brought a copy in to trade, which soon became mine 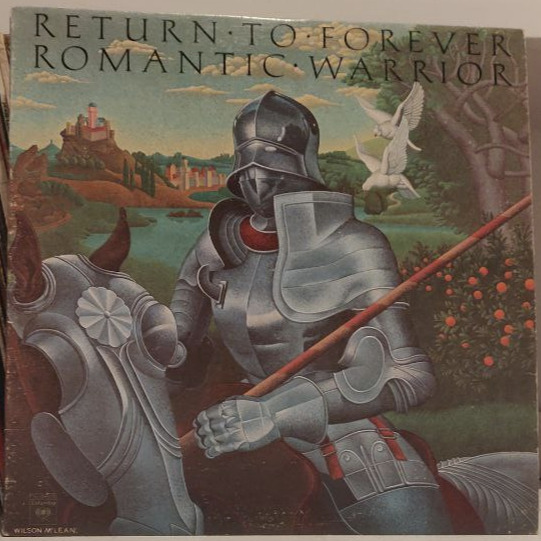 My copy of Return to Forever's "Romantic Warrior"

I don't know if 14 year old me was really able to process Romantic Warrior, but it was one of the coolest things I had ever heard. At that time, in order for me to like a record, it had to have great drums, and this one did not disappoint. But the musical prowess didn't stop there -- the bass playing was solid and the guitar was impeccable, but the piano/keyboard playing stole all of my attention. I looked at the back of the record sleeve to put names to the sounds I had just heard, and the one that stood out to me most was Chick Corea.

I had never heard of jazz fusion before, but if this is what it was then I wanted to hear more. I figured the easiest way to do that was to start listening to other stuff by this guy Chick Corea. If I remember correctly, the first group I found after Return to Forever was Corea's epoynmous Elektric Band a year or so later. I started to notice a pattern in what I heard. First, if you wanted to play with Chick, you had to be really on your shit. As a drummer, Dave Weckl's chops and feel amazed me, to say nothing of John Patitucci's bass playing and Scott Henderson's guitar. Second, the rules for what made jazz fusion were a lot looser than those that made the rock I was listening to at the time. Songs like "Got a Match?" were no doubt meticulously rehearsed, yet at the same time undeniably spontaneous.

The Chick Corea Elektric Band performing "Got a Match?" at the 1986 Bern Jazz Festival -- very 80s

As someone who was both into super-technical musicians and getting tired of the homogeneity of the rock I was listening to, both of these Corea-isms really appealed to me. Around the same time, I was discovering similar musicians, and started to idolize my (to this day) favorite drummer, Vinnie Colaiuta. Imagine my excitement when I found this video of Chick leading a trio with Vinnie as the drummer:

The final song of the set is called "Spain", which I found out was something called a "jazz standard". Unsurprisingly, this led me back to where I started -- to an earlier album from the Return to Forever band, the one that contained the original recording of "Spain": "Light as a Feather". While I could tell it was still jazz fusion, this album was a lot closer to straight ahead jazz than "Romantic Warrior", and certainly the Elektric Band.

Listening revealed the third (and maybe most important) truth I learned from Chick: the greatest musicians don't restrict themselves to one type of music, instrument, or bandmates. You can find instances of Chick playing Mozart with Keith Jarrett (another jazz great), collaborations with vibraphonist Gary Burton and with vocalist Bobby McFerrin, even of him playing the drums. All this is to say you would be hard pressed to type-cast Chick Corea. He was a musician before all else, not a pianist, keyboardist, or whatever.

While all of this is what I implicitly learned from Corea's music, he also never shied away from giving direct guidance. I found his advice for playing music in a group a couple of years ago, and it has immensely helped my playing: 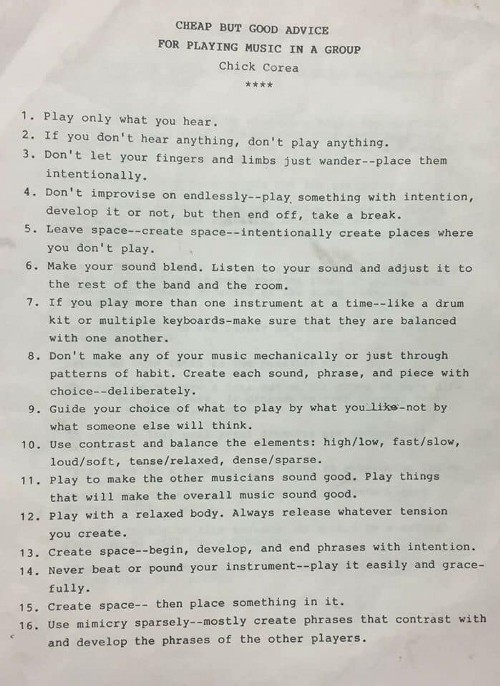 "Cheap But Good Advice For Playing Music in a Group", from The Christian Science Monitor

I'm far from the only person deeply impacted by Corea's music and teachings. His recent passing has caused many famous musicians to speak about how much he influenced them, my favorite of which being Vinnie Colaiuta's podcast posted after his death.

Listening to "Romantic Warrior" started a chain reaction that totally changed the way I looked at music and, in turn life. Chick was my gateway drug to Herbie Hancock, Dave Brubeck, Tom Jobim, and many, many more.

The world (especially me) will miss Chick Corea, but his music, teachings, and the impact they've had will last forever. RIP, Maestro.